A craftsman at work

A craftsman at work

“One day when I retire I’ll sort out these photos,” says 81-year-old Campbell Burdon with a wink and a smile.The photos he’s referring to (a whole drawer full) provide a fascinating historic record of the two decades Campbell spent working as a construction manager in the film industry. Many of the films he worked on are Australian classics such as The Man from Snowy River (1 & 2), Ned Kelly (starring John Jarratt), Moby Dick (starring Patrick Stewart), Anzacs (the TV mini-series starring Paul Hogan), Robinson Crusoe (Pierce Brosnan), Noah’s Ark (Jon Voight), The Echo of Thunder (Judy Davis) and Crocodile Dundee in Los Angeles.

On these films (and others), Campbell and his team were responsible for building all the sets and, as shown in the photos, some of them involved some truly mammoth construction projects. For example, on Noah’s Ark they had to build the ark! On Moby Dick, they had to build Captain Ahab’s ship, the Pequod. We are talking about a full-size wooden ship!

‘‘We built the Pequod over a metal frame housing ballast tanks,” Campbell explains. “To make it rock they filled the tanks with compressed air.”

On another set (for a film set in Adelaide called Disappearance), they had to build the entire main street of a town. Amongst the beautifully crafted buildings is the aptly named “Burdon’s Lumber Yard” – a nod of thanks from the producer for all Campbell’s quality work.

Walking around Campbell’s home in Cooroy is like being in a museum of movie memorabilia.

“Crocodile Dundee’s hat,” he says pointing casually to a hat hanging on his office wall – the very one worn by Paul Hogan in Crocodile Dundee in Los Angeles. His office also boasts a beautiful desk which belonged to Captain Ahab on Moby Dick, as well as plenty more items of interest. 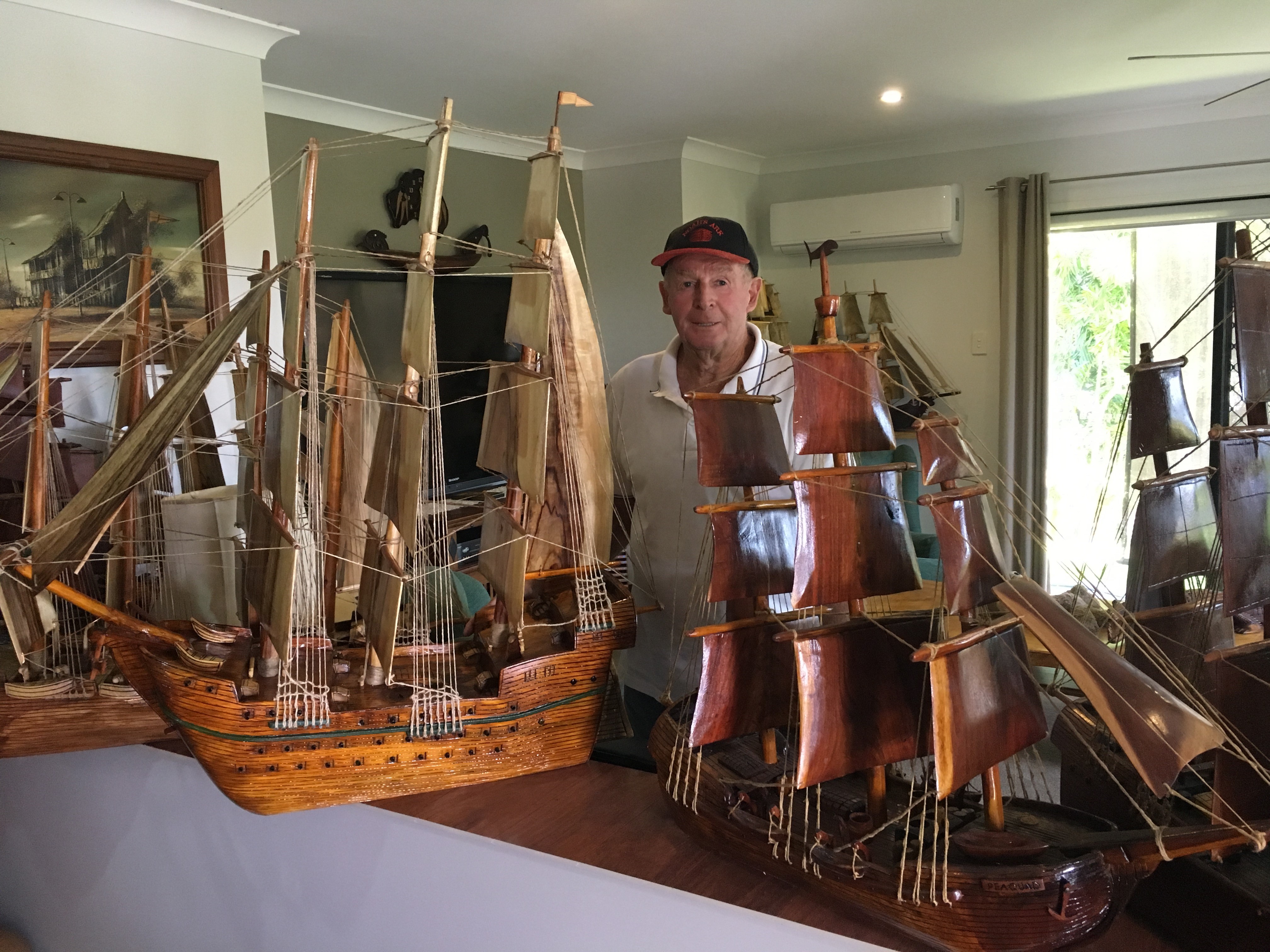 It was his work on Moby Dick that piqued Campbell’s interest in ships – an interest that continued to grow and would eventually lead him down a new path in his carpentry career. Over the last 4 years or so, Campbell has started to build model sail ships. The ships are works of art – carved out of solid wood (mostly camphor laurel from trees felled by his neighbour), with even the sails made from beautifully sanded and varnished wood. The attention to detail is outstanding – lifeboats, rigging and all. To date, Campbell has made at least 25 of these wonderful ships – some given as presents to friends and family, but many still on display in his home.

When asked if he’s ever considered selling his ships, Campbell explains that the main reason he has never tried is because they are not that easy to transport (heavy, with fragile masts and sails). He would be happy to sell them as long as the buyers come and collect them!

Whether he sells his ships or not is of no real concern to Campbell. He makes the ships because it is something he loves to do. This is more than just a pastime – it is a passion.

Don’t expect Campbell to be retiring anytime soon. He still works one day a week doing maintenance and repairs at Yandina Station. On his other days, you’ll find him in his workshop, plying his craft, and loving every minute of it.

A great company to deal with. Very knowledgeable, professional & thorough.. Termites are a daunting prospect but they made me

Your attention, advice and follow up service regarding my termite problem was exceptional. The dedication and assurance given during the

Just like to compliment the work Paul and Ethan did on spraying my house and shed at Cooroibah last week.