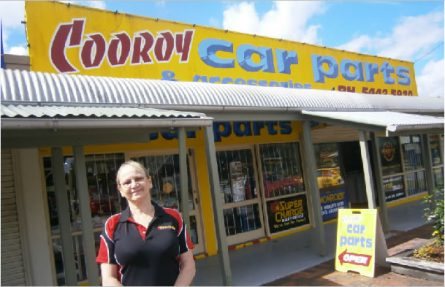 According to Elona Bosboom from Cooroy Car Parts moving from Brisbane to Cooroy ten years ago was the best thing they ever did. Elona and her late husband, Ken, previously had a mechanical workshop in Brisbane. Ken was a mechanic and Elona worked in spare parts – talk about a match made in heaven! From the time they first met they started working together so buying a spare parts shop in this beautiful part of the world felt like the right thing to do – and it was! Elona and Ken already had a strong connection with the area – one of their two daughters has lived in Cooroy for the last eighteen years and runs Cooroy Computers. So in 1996 they decided to build a house up on Black Mountain Range Road and then, when the Cooroy Car Parts business came up for sale in 2002, they leapt at the opportunity.

Since then the business has done well and they have managed to expand a lot. One only has to walk into the shop to see the extensive range of parts in stock – not to mention the easy-going, friendly repartee that Elona enjoys with her customers.

Of course the business was affected by the GFC but it was another far more tragic event that would really rock Elona’s world. In 2008 she lost Ken suddenly to a brain tumour. He was only forty nine years old.

Elona says the support she received from the community during this difficult period was “truly amazing”. The way the community rallied around (with food and all manner of assistance) was confirmation to her that they could not have chosen a better place to live and work. With this support and the help of her two loyal staff-members she has managed to soldier on with the business.

And then last year Elona was faced with a challenge of an entirely different nature. The first sign was a tiny piece of mud protruding from a crack in one of the tiles in her shower. This led to a closer inspection of the adjoining room (the laundry) and it was at the back of her linen closet that she started to see some termite damage. However, it wasn’t until the whole wall was opened up that they discovered a massive nest of termites inside. “It was shocking to see how much damage had been done,” says Elona. “I cried!”

Being such a huge nest her major concern was that the whole structure of her house had been compromised. A call to her insurance company provided little comfort. They said they would cover the water damage but not the termite damage!

Elona then contacted Cooroy Pest Control. “They were very professional and helpful – and they could understand my stress!” she says. After assessing the damage inside the house they set about locating the queen’s nest. This was discovered in a dead tree not too far from the house. The challenge now was to not only kill all the termites but to make sure they didn’t return! The “bait” (termite poison) was placed in the laundry wall, at the site of the queen’s nest and in various positions around the perimeter of the property. This not only killed the termites it also meant that any other termites would be attracted to the outside bait sites rather than venturing back to the house. Cooroy Pest Control also come back once every two months to check the bait sites which Elona finds reassuring. “At least I feel like I’m protected now,” she says.

According to Elona it could have been a lot worse. “The termites could have got into the roof area,” she says. “And that could have seriously affected the value of my house.” She urges residents in this area to be on their guard and act sooner rather than later. She has been told that this whole area is very prone to termites and the ones that got into her house were a particularly aggressive type. “I would suggest that people in this area get their houses checked out,” says Elona. “In the long run it could save them a lot of heartache.”

You guys have been fantastic helpful, organized, approachable and above all understanding of people like me who have absolutely no

Jim and Pam, would like to thank all the staff at Cooroy Pest Control in helping to keep us free

Thank you Cooroy pest control excellent service very professional. I found Shane, Paul, Karlee, and all staff were so helpful