Guard your home against termites this termite season

Guard your home against termites this termite season

When renovation leads to devastation 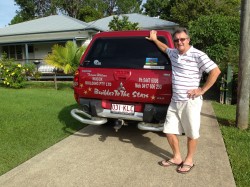 So here’s the scenario: you’ve been thinking about laying some pavers out the back – maybe leading from the back door to the washing line to avoid having to tramp through mud on those rainy days. It’s something you can do yourself. What could possibly go wrong?

Well, surprisingly, there actually is something that can go very wrong. One small oversight on a seemingly simple job like this can potentially have devastating consequences.

It’s a scenario that Trevor Wilcox from Wilcox Building P/L knows only too well. Trevor has been a licensed builder in the Cooroy area for over twenty years now. In that time he’s built two child-care centres, many industrial/commercial units and done more renovation jobs than he cares to remember. He’s also seen how devastating the smallest of oversights can be. “It’s usually just a completely innocent mistake,” says Trevor. “We’re not talking about people taking short cuts to save money. These things happen because people don’t know any better. No one has told them.”

So what could possibly go wrong with a simple paving job? Well, when a house is originally built there are certain anti-termite measures that have to be adhered to by law. Building inspectors will have checked these and signed off on them. For example, one important rule is that with raised houses (like Queenslanders) there must be a visible gap of at least 75mm between the ground and the building. When laying your pavers right up to the back door it is very easy to bridge that gap. And that’s all the termites need. Now they can build their mud barrier up to your floorboards and walls. Inadvertently you have just given them access to your home.

Over the years Trevor has had the unfortunate task of discovering many scenes of termite devastation. “People want a renovation done and they call me in to have a look,” he explains. “Now, most people don’t crawl under their houses, especially if they are low set.” But of course that is one of the first things Trevor does and it’s on these occasions that he so often finds termite nests. “Often it’s the first the owners know about it,” he says. “They may have noticed a loose floorboard or a small damp patch in a corner – but they’ve never thought much about it. It’s only when you get underneath and have a proper look that you see the termites. They can cause an unbelievable amount of damage without you even knowing!”

Trevor remembers one home owner telling him that he only discovered the termites in his house because he heard them! Lying there one quiet night he heard a noise he couldn’t explain. It took him some time before he realised that the sound he was listening to was actually termites gnawing on his house! Now that’s what you call a real nightmare on Elm Street!

According to Trevor, some people, especially those living in older houses, think that their houses are safe because they had a spray treatment done about ten years ago. Unfortunately the effectiveness of the spray has often worn off so it really is worthwhile having your house checked over. This is even more important if any “DIY renovations” have been done in the past. Using wood that hasn’t been treated properly is another common mistake. Varnishes and paint may preserve the wood against the weather but termites can still get in, especially where the wood has been cut.

So the obvious lesson here is make sure you know what you’re doing if you’re going to do your own renovations. Otherwise it might be wiser to call a qualified builder like Trevor Wilcox in who knows what he’s doing.

Trevor’s best piece of advice when it comes to termites is “prevention is better than cure.” He often recommends to his clients that they have a termite baiting system installed. He says the one that Cooroy Pest Control provide’s is “state of the art”. This is a long-term proven solution.

“Not only can these systems give homeowners peace of mind but they can also add value to a property,” says Trevor.

Glenn was meticulously thorough and his extensive Report reflects that. He should be given a gold star by management.

You guys have been fantastic helpful, organized, approachable and above all understanding of people like me who have absolutely no

Jim and Pam, would like to thank all the staff at Cooroy Pest Control in helping to keep us free