Pete Velenski’s involvement with native bees (also known as stingless bees, bush bees or sugarbag bees) goes back more than 20 years. Back then, Pete had a land clearing business and would often come across hives in hollow trees and logs.

“We started to relocate them,” says Pete. “Otherwise they would be turned into mulch which wouldn’t be good.”

Not good at all, especially considering the important role these bees play in our eco-system with the rapid decline in pollinators becoming a real problem around the world. To date, Pete estimates he has rescued and relocated well over a hundred native beehives. Considering that each hive usually houses between 3,000 and 7,000 bees (and sometimes more), that is a lot of potential pollinators!

Pete retired from land clearing some time ago but his bee work is still going strong. These days other land clearers call him when they come across hives and he goes out and rescues them.

“We have to get to them quick,” he says, “before parasites get in and destroy the hive.”

The bees are relocated to a variety of locations – often to farms as they are very popular with farmers, especially those farming macadamias, blueberries, mangoes, avocados, lychees and strawberries. Macadamia farmers are especially keen because native bees are small enough to get right down into the flowers (unlike the bigger honey bee) and this can lead to improved harvests and bigger fruits.

Pete also places hives on people’s properties, including many around Cooroy, Pomona and further afield. A lot of people think these bees prefer native vegetation, but they actually thrive even more (and produce more honey) in areas near urban gardens because of the flowering plants all year round. Native bees play an important role in pollinating both native and exotic plants, including a lot of vegetables and herbs.

Pete also has a number of hives at his place in the suburbs of Cooroy, including many still in their original logs and stumps – one of which he rescued when Cudgerie Estate was being cleared some 18 or so years ago.

He is also very involved in the propagation of native bees and builds high quality “bee boxes” which the bees clearly thrive in. Pete warns that there are a lot of cheap boxes out there which he refers to as “bee coffins” for good reason. He recommends that people should only buy boxes if there are bees supplied with them.

Pete has spent a lot of time perfecting his boxes which he builds in his impressively equipped workshop. To create ideal conditions for the bees there are a lot of factors to consider. For example, his boxes have thick walls (made from long-lasting cypress pine) so that they are well insulated (like being inside a log). The ideal temperature for the bees is between 18 and 37°C, hence the reason native bees only occur naturally in the warmer, wetter areas of Australia. 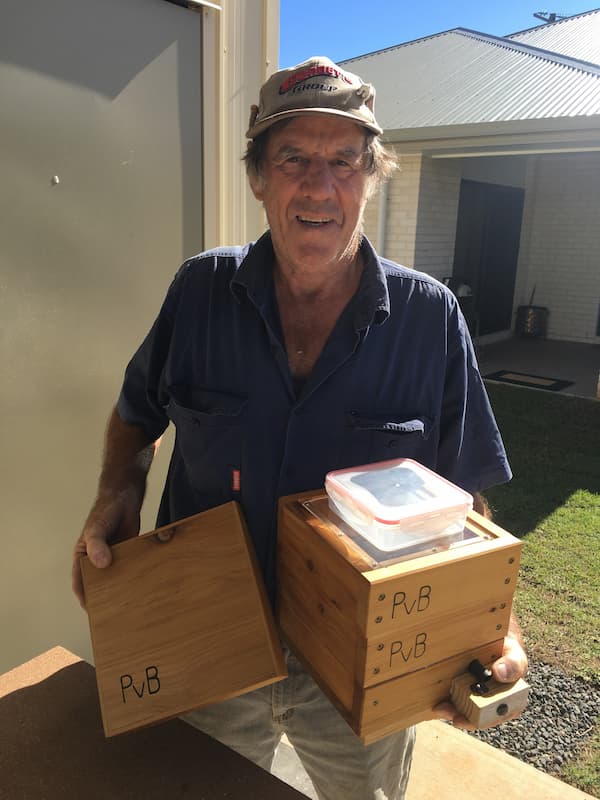 Pete Velenski with one of the native bee boxes he makes

“If the temperature is not right the bees remain dormant,” Pete explains.

He also supplies polystyrene covers to prevent the boxes from getting too hot.

Pete’s boxes consist of three sections that come apart. This enables the owner to remove a section (when the hive is full) and use it to start a new hive. When Pete sells a box it comes with the bottom section “choc-a-block” with the comb, bees, brood, etc.

The boxes also have a place on top to attach a container to collect the honey, but this only happens when all three sections are full. A typical native beehive will only produce approximately 1kg of honey a year, which probably explains why it can cost up to $400 a kilo! Generally called “sugarbag honey”, the taste is unique and delectable.

Look out for Pete at events like Cooroy Fusion, the Gympie Show and the Cooroy Landscape open day and anyone interested in the propagation of native bees can contact Pete on 0422 878 992.

Professional and efficient service. Our garden was invaded by ants and it is under control now.

Excellent communication with the customer, they turn up on time and do the work as required. Very knowledgeable operators.

You did a great job with the ants on my outdoor tiled area, and the follow-up gave me peace of